XiaomiDevices – There are always ways to show off the gadgets that we have. In addition to photos by showing the phone you own, now we can use a special watermark belonging to a particular device, such as a feature that Xiaomi has.

Xiaomi some time ago introduced the AndroidOne device, the result of its collaboration with Google. Although targeting the middle class, this device that does not carry Xiaomi’s typical MIUI ROM has brought dual camera specifications which are usually only embedded in flagship-class mobile devices.

Xiaomi A1, nicknamed AndroidOne, has a feature where users who want to show off their camera shots can label their images with a special watermark that shows the camera captures of the device. Of course, this will add value to the image obtained, at least people know that the image is taken from the Xiaomi AndroidOne camera.

Watermarking is basically the process of embedding certain data into other data. Usually, watermarking is used to indicate the copyright and originality of an object to protect the object from being taken or taken without including the source of the object.

This feature has been around for a long time, and one of them is used in the field of photography. In order not to be claimed by others, a photographer will usually label his camera images with a certain watermark, it can be his name, logo, or other marks.

Well, if you are one of the people who want to label the images captured by the Android device camera that you have with the Xiaomi AndroidOne label, now you can do it even if you don’t have the phone.

How to Make Xiaomi Watermark on Other Phones

To create a Xiaomi watermark, you only need to download a third-party application from Ananto’s Lab. The app is Shot on MI. Here’s how 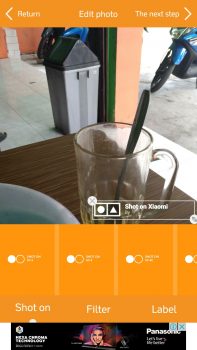 That was how to make a Xiaomi watermark using Shot on MI. Actually this application can be used to set filters and add other labels.